The science of ergonomics has changed the way forklift manufacturers and users evaluate productivity.

A comfortable forklift operator is a productive one. It’s an intuitive statement, but one that has historically been difficult to measure and manage. What is the best way to enhance comfort? What ergonomic investments or features will have the biggest impact—and at what cost?

Amid all the technological innovations inside and around forklifts, Carl Modesette, director of product engineering for UniCarriers Americas, says the science and study of ergonomics has grown significantly in the last several years. Detailed data on each task, every movement, and their cumulative effect over time has enabled OEMs and end users to quantify what was previously cloudy.

“More and more users are starting to be able to put dollars and cents to ergonomics, whether it’s avoiding costs of injuries, strains and sprains, or savings directly or indirectly tied to productivity improvements,” Modesette says. “They’re starting to look at ergonomic improvements in terms of return on investment as opposed to just an added cost or fancy feature.” 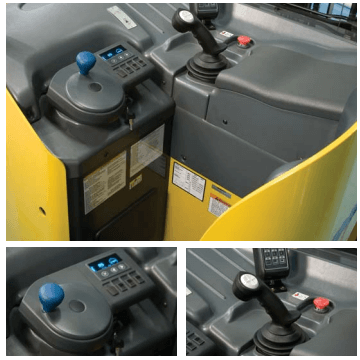 For OEMs, Modesette says the wealth of ergonomic science has granted better insights into product design. New seats with suspension help reduce the vibration operators feel on sit-down trucks and also offer increased weight adjustment ranges and lumbar support. Controls are moving away from manual and toward electronic, like steer-by-wire or fingertip hydraulic controls.

“A lot of these things are not necessarily new,” Modesette says, “but because end users and fleet managers have better awareness of ergonomics, they’re requesting and adopting these features at a higher rate.”

Using a remote control to advance the forklift reduces the amount of times an operator has to get on and off the vehicle. Each mount and dismount introduces shock to the operator body.

Another aspect of ergonomics is visibility and awareness, Modesette says. How well can the operator see; how aware is he or she of surroundings; and how aware are other people around the equipment? There has been “huge interest,” he says, in spotlights designed to alert nearby pedestrians and cameras to improve operator visibility at the forks. Fork-mounted cameras help operators engage loads more accurately and minimize the frequency and duration of craning one’s neck.

“The next leap forward will involve integration of various tools into a common platform,” Modesette says. “We’re not far away from replacing old school gauges and monochrome readouts with something that looks like a tablet or touchscreen display that can incorporate the functionality of add-on devices in one nice-sized screen. Costs for those technologies are coming down, and it’s becoming more realistic for it to become the new standard in operator interface for industrial vehicles.”

Josh Bond is Senior Editor for Modern, and was formerly Modern’s lift truck columnist and associate editor. He has a degree in Journalism from Keene State College and has studied business management at Franklin Pierce University.